The Nikon FE 35mm single lens reflex camera was introduced in 1978 and manufactured in Japan by Nikon until 1983 when it was replaced by the Nikon FE2.

The Nikon FE is one of numerous other similar sized manually focused 35mm slr cameras produced by the ‘Big 5’ manufacturers of the day (Nikon, Canon, Pentax, Olympus & Minolta) who, at the time, had become locked in a miniaturisation battle with each other and each produced cameras that could be regarded as contenders for the perfect manual focus small slr title.  This rapidly changed with the advent of autofocus cameras such as the Nikon F4  when the trend then turned to favour those larger, heavier cameras that evolved into digital behemoths such the Nikon D1,2,3,4 & 5 dslr’s.

Olympus can probably take the most credit for starting the mass miniaturisation of 35mm slr cameras from the early 70’s to the mid 80’s when they released their ground-breaking OM-1 and subsequent OM series 35mm slr cameras.  Pentax, Nikon, Canon and Minolta were hot on the heels of Olympus in the race to downsize and add features.

All these cameras from the main manufacturers of that era were built to very high standards and quality materials in order to withstand the rigours of ‘semi-professional’ use.  They are all still plentiful on the used market and most of them represent viable options at reasonable cost.  Many of the later models, those which were sold slightly earlier than autofocus appeared on the scene, are often still in excellent condition and surprisingly often lightly used.  This is possibly due to the rush to buy autofocus cameras at the time and even now it is worth passing on the more heavily used manual focus offerings as something cosmetically better and less obviously used from that era will almost certainly appear very quickly in the usual places.

There’s no denying the Nikon FE is a pretty little camera, it’s small even by comparison with many of today’s mirrorless cameras.  It is a joy to use and I like to have it with me on my Wild Light photography workshops.  If you prefer cameras with a basic traditional layout and without extraneous features, then the Nikon FE is a good starting point.  However, the Nikon FE is not a purely mechanical camera as it does need a battery to operate the ttl meter and electronic shutter, although a single mechanical speed of 1/90th second is available if the battery needs replacing.

Battery life is impressive, they can last for months and the battery options are 2x S76 or A76,  LR44 or SR44, or one 1/3N (which is my preferred choice).  There is a battery charge indicator led on the back of the top plate to the left of the viewfinder.  Push the lever down and the red led will light up to indicate the battery probably has enough charge to last at least another six months!

The meter display is analogue, it is a simple swinging needle that points to the ttl meter’s indicated shutter speed from the list on the left side of the viewfinder when the camera is set to Auto (aperture priority).  When working in manual exposure mode, the selected shutter speed on the dial is indicated by a green marker in the viewfinder and if the ttl meter has a different opinion to the photographer of the metered shutter speed, this is also indicated by the swinging needle.  It’s a very simple system that gives instant feedback for comparison between a shutter speed that has been manually chosen by the photographer and a shutter speed chosen by the camera meter.  It is a simple and efficient system that works well without the distraction of flashing led’s and other viewfinder clutter.  Focus is confirmed by the universal ground glass screen with a centre circle and split image.  The standard K screen viewfinder is reasonably bright and it is interchangeable with E or B screens.  Unofficially, the later FE2 screens (B2, E2 & K2) can also be used in the FE, but it is advisable to increase the exposure by up to 1/2 stop to compensate for the brighter viewfinder image which will affect the meter reading.  If working in aperture priority (Auto) mode, +1/2 can be set on the exposure compensation dial.  However, if you are using transparency film it could be worth doing a few test exposures and recording your settings to establish the optimum compensation setting before risking underexposed transparencies.

There is a small window under the pentaprism directly above the lens aperture ring that displays the aperture setting in the top of the viewfinder image.  All of the necessary basic information with regard to shutter speed, aperture and focus is clearly displayed in the viewfinder and is one of the reasons that these old 35mm slr’s are such a joy to use.  Photography is about creating images and the simplicity of operation of these cameras is a breath of fresh air in our technology obsessed craft!

Nikon F mount cameras score well over all the rest because virtually every F mount lens ever made will fit on a Nikon F mount body, including current Nikon digital bodies.  This is significant, Nikon built their reputation on the optical quality of their pre-ai, ai and ai-s lenses and many of these older lenses will give their modern plastic-and-air counterparts a run for their money.  Some, as the Nikon 50mm f1.2 ai-s lens below, are still available new and they are worthy of consideration for use with current dslr’s.  The downside of using manual focus lenses with a dslr is that dslr screens are not optimised for manual focus and the rangefinder and green dot confirmation in a Nikon dslr viewfinder is best regarded as an approximation, especially at the widest apertures.  If you want to use manual focus lenses exclusively on a dslr, then it is worth investigating having the dslr focusing screen replaced with a split prism type and recalibrating the camera metering system accordingly.

If you are familiar with traditional slr control layouts from the era, the Nikon FE will hold no surprises at all.  It is entirely conventional with the exception of the double exposure lever position under the wind on lever.  When turned towards the 6 o’clock position, the wind on disengages and the shutter will cock but the film does not advance, so you can get creative with double exposures if you wish to.  I never use it.

Manual shutter speeds range from a whole 8 seconds to 1/1000th second plus B (bulb exposure).  This means that the Nikon FE is one of the best traditional 35mm cameras available for long exposures.  Load up with a roll of Fuji Acros and you are good for up to two minute exposures without even having to think about reciprocity failure because the film is unaffected up to two minutes.   The camera automatically locks the mirror up at speeds from 1/8th-8 seconds and when set to Auto, the shutter will stay open for as long as the meter requires it to be open and the camera will take care of exposures running into several minutes. The shutter dial also indicates the mechanical 1/90th sec speed, indicated as M90, and the maximum flash sync speed of 1/125th second is shown in green.  There is a chrome button in the centre of the dial that you must hold down as you turn the dial from the Auto setting to a manually selected shutter speed between B and 1/1000th second.  From my experience of using my own Nikon FE, the shutter dial detents are firm and not easily moved unintentionally from a chosen speed.  Overall, the essential controls have a robust feel that indicates the consideration and thought that was put into the layout for the intended use of these advanced semi professional cameras. Thirty years on, my camera is still as firm and tightly fitted together as it was when I first took it out of the box and this is a testament to the quality of materials and workmanship the camera is built with.

The film rewind, iso dial and exposure compensation assembly are situated on the left side of the top plate.  The iso setting is fiddly and requires lifting the outer ring and turning to the correct iso and dropping the ring back into place with a positive click.  The exposure compensation setting requires pushing in a silver button and turning the scale -or+ for up to two stops of compensation in 1/3 stop increments.  This operation is fiddly and impossible with gloves, but there is satisfaction in the knowledge that nothing is going to be moved accidentally.  The back of the camera is opened by lifting the rewind upwards and it springs open to reveal the film gate and transport rails.  Film loading is from left to right out of the cassette and is a manual procedure.  When the last exposure on a roll has been made, the button that is set into the base plate to the right of the tripod socket needs to be pressed in.  This disengages the wind on clutch and the film can be wound back into the cassette by turning the crank clockwise on the top plate.

The clockwork self timer lever is on the front, left of the lens mount as you look at the camera face on, with the stop-down lever next to it on the lens mount/ mirror box.  The lens release button is on the opposite side of the body, as is the flash pc cable sync terminal.

The baseplate has a 1/4″ tripod socket, contacts for the motor wind, battery compartment cover and rewind release button.  The back of the camera has a film carton lid holder to remind you of what film you loaded.

The conventional single contact hot shoe is mounted on the pentaprism housing, the viewfinder will take dioptre lenses and is surrounded by a rubber cushion to protect spectacles.  It is possible to fit a DK-3 rubber eyecup to the viewfinder and these are still available new.

Overall, the Nikon FE is a very easy camera to like.  It’s a camera that will encourage any photographer to pick up and make images.  If you are already committed to film or are thinking about trying film photography for the first time, a Nikon FE or a similar cameras from that era represent remarkable value.  These are not disposable cameras, they were built to last and with their relatively light weight and small form, they make a wonderful addition to a photographer’s travel camera inventory for traditional 35mm film photography. 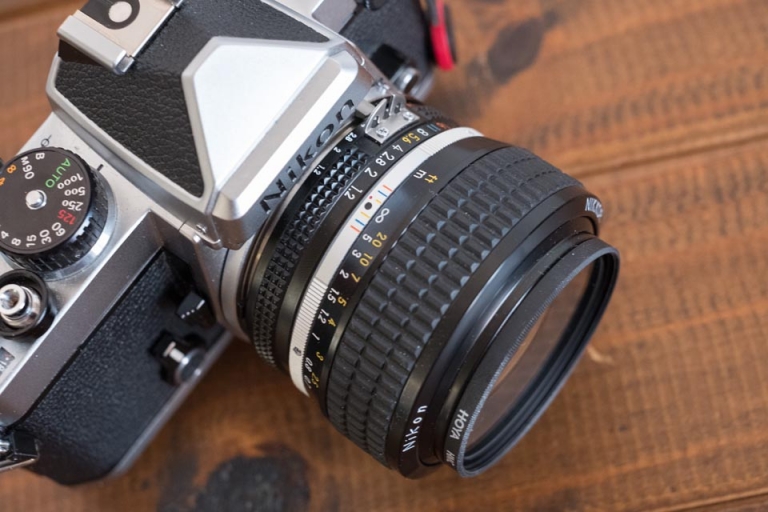 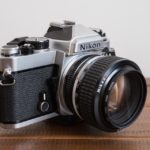 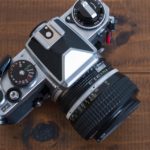 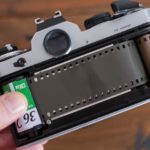 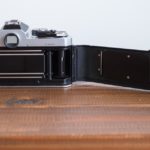 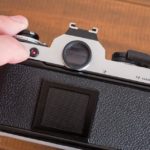 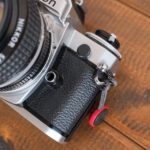